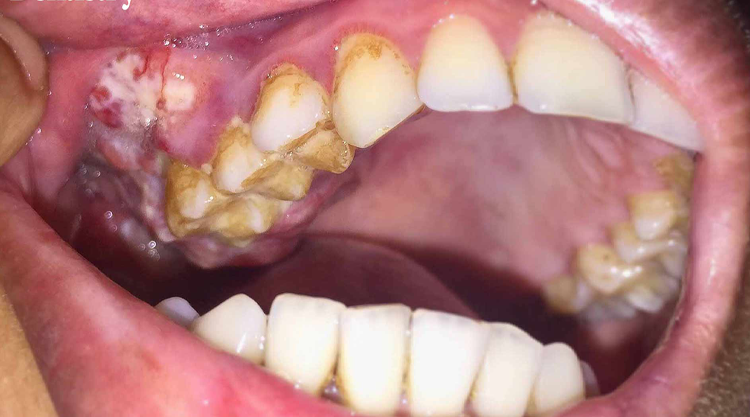 Mouth cancer can affect any part of the mouth, including the tongue and lips. The most common symptoms are having a sore or ulcer for more than three weeks. You should see your dentist or doctor if you have any symptoms in your mouth that are unusual. The outlook (prognosis) for people with mouth cancer is good if it is diagnosed early.

What is mouth cancer?

Mouth cancer is also sometimes called oral cancer. Worldwide it is the sixth most common cancer. Although mouth cancer is uncommon in the UK, it seems to be getting much more common: the number of cases doubled in the 20 years from 1994 to 2014. There are around 7,500 cases diagnosed each year in the UK. It is twice as common in men as it is in women. It is rare in people aged under 40 but it is becoming more common. Many cases are diagnosed by dentists rather than doctors, often during a dental check-up. See the separate leaflet called Cancer for more general information about cancer.

A cancer starts from one cell becoming abnormal. The exact reason why a cell becomes cancerous (malignant) is not fully understood. It is thought that something changes or damages some of the genes in the cell. This makes the cell behave abnormally and reproduce out of control. See the separate leaflet called Causes of Cancer for more details.

Some people develop mouth cancer for no apparent reason. However, certain risk factors increase the chance that mouth cancer may develop. These include:

Smokeless tobacco is used widely worldwide and is also known to cause mouth cancer. It is particularly common in South Asian countries. There are many different forms - for example:

What are the symptoms of mouth cancer?

In many cases, changes are seen in the mouth before the cancer develops. This means that early treatment of these changes will actually prevent a cancer developing.

Other signs of mouth cancer include:

All of these symptoms can be due to other conditions, so tests are needed to confirm the diagnosis.

Any ulcer in the mouth that does not heal after three weeks should come check it with us.

How is mouth cancer diagnosed and assessed?

To confirm the diagnosis

It is likely that you will need a biopsy. A biopsy is a procedure involving a small sample of tissue being removed from a part of the body. The sample is then looked at under the microscope to look for abnormal cells. Results of a biopsy can take a week or two. You can find out more in the separate leaflet called Biopsy.

Assessing the extent and spread (staging)

If you are found to have mouth cancer then further tests may be done. For example, more biopsy samples may be taken, this time from the nearby lymph glands (lymph nodes) by using a fine needle. This is to assess if any cancer cells have spread to the lymph glands.

Other tests may be arranged to see if the cancer has spread to other parts of the body. For example, a computerised tomography (CT) scan, a magnetic resonance imaging (MRI) scan, or other tests.

This assessment is called staging of the cancer. The aim of staging a cancer is to find out:

What are the treatment options for mouth cancer?

Mouth cancer treatments which may be considered include radiotherapy, surgery and chemotherapy. The treatment advised will usually depend on various factors such as the exact site and extent of the cancer and your general health.

You should have a full discussion with a specialist who knows your situation. They will be able to give the pros and cons, likely success rate, possible side-effects and other details about the possible treatment options for your type of cancer.

You should also discuss with your specialist the aims of treatment. For example:

The most common treatment is surgery. The type of operation depends on the size of the cancer and its site. The operation may be to remove the cancer and some of the surrounding normal tissue.

Laser surgery may sometimes be used to remove small mouth cancers. This may be combined with a light-sensitive medicine in treatment known as photodynamic therapy (PDT).

Sometimes a special type of surgery called micrographic surgery, or Mohs' surgery, is used for cancers on the lip. In this surgery, the surgeon removes the cancer in very thin layers and the tissue that has been removed is examined under a microscope during the operation. This technique makes sure that all the cancer cells are removed and only a very small amount of healthy tissue is removed.

Radiotherapy is a treatment which uses high-energy beams of radiation which are focused on malignant (cancerous) tissue. This kills cancer cells, or stops cancer cells from multiplying. See the separate leaflet called Radiotherapy for more details.

Two types of radiotherapy are used for mouth cancer: external and internal.

Chemotherapy is a treatment which uses anti-cancer medicines to kill cancer cells, or to stop them from multiplying. Chemotherapy may be used in conjunction with radiotherapy or surgery. Chemotherapy may also be advised if the cancer has spread to other areas of the body. See the separate leaflet called Chemotherapy for more details.

Newer treatments are being used in research for the treatment of mouth cancer:

Targeted therapy is a type of chemotherapy that only affects or targets cancer cells:

Immunotherapy is treatment that aims to boost the body's own immune system to destroy the cancer cells. It is also sometimes called biological therapy:

© 2022, All Rights Reserved, Design & Developed By: ARE InfoTech